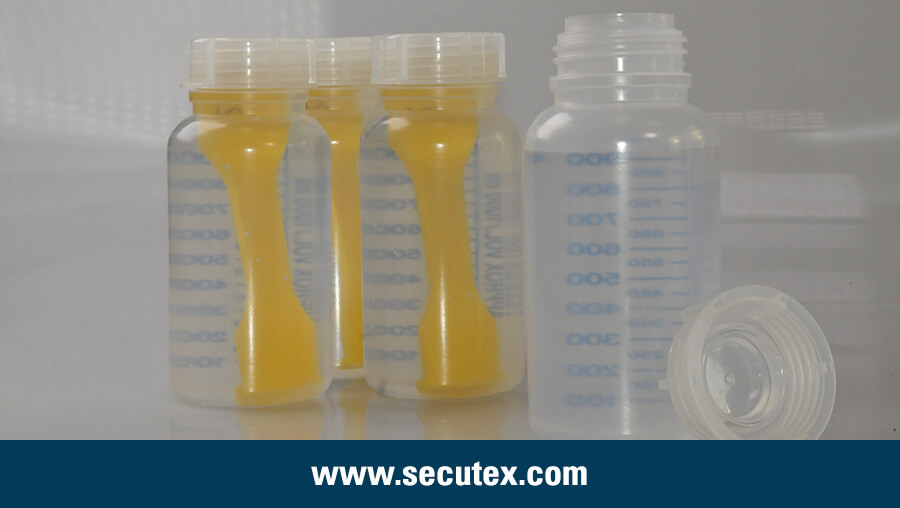 General information
The suitability of the secutex PU material for a specific application often depends on its resistance to chemicals. Polyurethanes can behave very differently when exposed to chemical substances, since their compositions sometimes differ greatly and the various components react differently to the exposure to other substances. Therefore, a clear separation of the effects described cannot be made in every case.

For special applications a special resistance test regarding the swelling and mechanical properties is recommended!

Exposure time, temperature, quantity and concentration
The chemical resistance depends essentially on the type, exposure time, temperature, quantity and concentration of an acting chemical. During the chemical degradation that may occur, the molecular chains of the polyurethane react with the chemical in question and are plit. This process is usually preceded by swelling. In the course of decomposition, the polyurethane shows a loss of strength, which under extreme circumstances can go so far that the material decomposes.

Saturated hydrocarbons
Due to the contact of secutex polyurethane with saturated hydrocarbons, such as diesel oil, isooctane, petroleum ether and kerosene, a slight swelling takes place, which at room temperature is approximately 1 to 3 % and is associated with a decrease in tensile strength of not more than 20 %. After evaporation and reduction of swelling, the original mechanical values are almost reached again.

Aromatic hydrocarbons
In contact with aromatic hydrocarbons, such as benzene and toluene, the secutex polyurethane component swells very strongly at room temperature and absorbs up to approx. 50 % of the weight of these aromatic compounds while the mechanical values drop.

Lubricating oils and greases
The test oils IRM 901, IRM 902 and IRM 903 do not cause a decrease in strength at room temperature. Even after three weeks storage at 100 °C there is no decrease in tensile strength. The resistance of secutex polyurethane to many lubricants depends on their additives, which may cause irreversible damage. Special tests are recommended here.

Practice tip:
There are endless different chemical substances, secutex cannot test the suitability of the polyurethanes in combination with all these substances. However, even a small test often helps for an first evaluation:

1. Weighing of the material sample

2. Put the material sample into a closable test bottle and then place the bottle on the room heater. Of course, the safety instructions for the specific chemicals must be observed.

3. After a period of one week take the material sample out and clean it.

If the results of the weighing are equal and the optical impression does not show any change, then it can be assumed that the secutex material in combination with the selected test liquid is resistant.

If the weighing results are NOT equal and/or the optical impression shows a change, then a resistance of the secutex material in combination with the selected test fluid can NOT be assumed.